Posted by Adriana on March 06, 2010
Hi everyone! Misty is feeling much better and is ready to get the twitter contest going again.
She's changing the requirements a little bit, make it a little easier.
She would love to have more Facebook Fans and Twitter followers but she need your help to spread the news :)
Refer as many people as possible to the Facebook Fan Page.
Use this link: http://www.facebook.com/pages/Misty-OBrien-Designs/175146610905?ref=ts
Have your referrals leave a post on the wall and say "I was referred by: Your Name".
Prize for the most referrals: a 3 month pass to her store at Gingerscraps.
She's also giving out more prizes! Follow her on twitter at @mobriendesigns
Then up to 5 times a day, tweet this message: Become a Fan of Misty O'Brien Designs on FB! Post on the wall & you could win a $10 GC to her store! @mobriendesigns http://www.facebook.com/pages/Misty-OBrien-Designs/175146610905?ref=ts(must tweet it exactly to for your tweet to count and only 5 tweets per day will be counted).
Whomever tweets the most over the contest period will get a 1 month pass to her store at Gingerscraps.
AND 3 new lucky fans AND their referrers will each get a $10 GC to her store!
All they have to do is post on the wall and let me know who referred them to the Facebook Fan Page.
If you are a new fan and weren't referred by anyone, that's ok too! Just leave a post letting me know you're a new fan.Everytime the Facebook Fan page reaches 100 new fans (300, 400, etc) everyone gets a freebie from me!And a little note, She's counting all the previous tweets and referrals from last week too.
Ok, ready set go!! 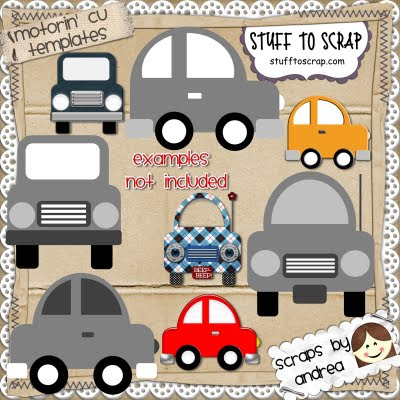 Hello there, I hope you enjoyed the Fort Wilderness Blog Train. Those Quick Pages are awesome!!! Today I have for you a very cute set of CU templates at Scraps by Andrea . They are a set of four vehicles called "Motorin'" . Me and the other girls of Andrea's CT made great freebies for you using this set. Grab mine and go to CT blog to download theirs. Click here and download mine Come back later, tonight we are gonna start another Blog Train!!! Yes, the girls at STS are having a HUGE Blog Train with beautiful fall colors, you will end it up with a great MEGA kit, so don't miss the train. See you tonight!!! 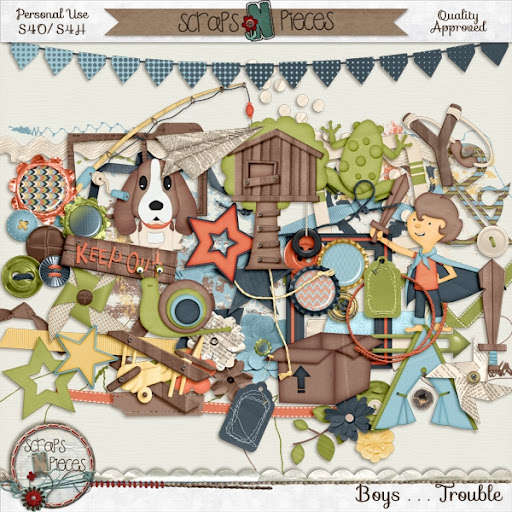 Little boys can be trouble, but you have to love them just the same.  This kit will help you capture all of your little boys adventures from forts to wooden swords, frogs to puppy dogs, and slingshots and snails.  The masculine color palette is perfect for all kinds of layouts.  Take pictures of flying paper airplanes and climbing trees with Boys...Trouble.   I just love how this kit turned our for January's Bits-N-Pieces. You can get any of these parts for only $1.00 each at Scraps-n-Pieces. Layouts that our CT created with this kit. Do you have a bucket list of activities for January.  If you are following in the forum for this years Project Life challenge, you will want this kit to scrap your fun activities. Some people spend the winter bundled up in front of the fire, while others spend every moment they can playing in the snow. My Life… January makes it easy to document those cold winter days, however you choose to spend them. This cool-colored kit draws on snowy hues